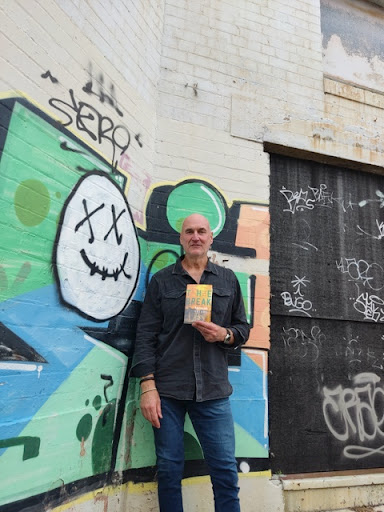 Today we welcome YA author, Phillip Gwynne and his explorations of justice, privilege and young people finding agency over their own life in his new YA fiction novel, The Break.

I lived in Bali with my family from 2010 to 2016 and would occasionally visit Australians incarcerated in Kerobokan Jail, including members of the Bali 9.

When the 2015 election was held, I, like many other people, hoped that Joko Widodo (Jokowi) would prevail because I thought that, not being from Indonesia’s elites, he may have a more enlightened view on human rights and commute the sentences of the two members of the Bali 9 who had been sentenced to death: Myu Sukumaran and Andrew Chan.

As history tells us, exactly the opposite occurred, and on the 29 April 2015, on the island of Nusa Kambangan, those two men, along with seven other prisoners, were executed by firing squad.

That morning when I woke up it was like a black cloud was hanging over the resort isle of Bali. Sukumaran and Chan had been, by their own admission, wannabee gangsters, when they were arrested. Seduced by the idea of easy money fuelling a glamorous lifestyle, they’d made some reckless – and morally dubious – choices. Sukumaran was 24 when they were arrested and Chan was even younger, only 21. Science tells us that the male brain only reaches full maturity at 25 years – compared to 21 years for the female brain – and when I think back to the similarly reckless choices I’d made at around the same age as these two, I have no trouble believing that. Yes, wannabee gangsters, but by the time they were executed, ten years after their arrest, they were both completely rehabilitated, they were good men – kind, caring, thoughtful men, and, in Sukumaran’s case, possessed of huge creative talent as a painter. As Sukumaran wrote on the back of his now famous portrait of Jokowi, ‘People can change.’

I knew that morning in Bali that I had no choice, that I needed to write about this. It took me a long time, however, to find a way to do this. There are many arguments against the Death Penalty, but the cruelty of knowing exactly when your loved one is going to die is, for me, almost the strongest one. I just didn’t want it to feel as if I was ‘exploiting’ the pain and suffering of the families of Sukumaran and Chan.

Eventually, after many false starts, I returned to very familiar territory for me, Young Adult fiction, where my first bookDeadly Unna? (also based on tragic real-life events) was published. I created a character, 16-year-old Taj, who is an Aussie expat, a surfer, living in Bali. And it’s Taj’s father Kimbo who is in jail, who was busted for attempting to smuggle drugs into Indonesia. Us writers love to write about turmoil, and for most people the most tumultuous time of their life is when they’re transitioning from children into adults. I think this is especially true of Taj because he’s had a very privileged life, with maids and drivers, and in some ways he’s been prevented from accepting some of the responsibilities that come with maturation. But then he’s on the run with his father through the sprawling archipelago of Indonesia, with the Indonesian authorities after him, and the Australian authorities not necessarily welcoming him back home with open arms. Suddenly Taj has a whole lot of growing up to do. I think young people, who do not yet have the power to vote, can feel as if they have no political agency, as if everything is in the hands of, as Taj says in the book, ‘old men in bad suits’. But in The Break, the young people prove that they can have agency, they can make a difference. As the tagline says ‘Beat the system. Find the truth. Save a life.’

One of the most enjoyable aspects of writing The Break is that I was able to write about a country I love, and see as a second home. And because I lived in Bali for five years, have travelled extensively through Indonesia and speak basic Bahasa Indonesia, I felt pretty confident that I could get some of this extraordinary country on the page. But I also wanted to capture some of the complexities that the arrest and execution of Sukumaran and Chan had brought up and I wanted to do this in a way that didn’t seem like I was just doing a ‘job’ on Indonesia. Though I was appalled by Jokowi’s decision to start executing prisoners again after a ten year moratorium, I also knew that it did not necessarily represent the will of the Indonesian people; I know many Indonesians who were as saddened as I was by these senseless deaths. So one of the most difficult aspects in writing The Break was to find a way to represent this viewpoint as well.

Though I spent a great deal of time and effort trying to get this right, as an author, and a non- Indonesian one at that, you’re never quite sure. So when my publisher said they were getting a sensitivity report from a young Australian-Indonesian woman I was understandably nervous.

But here’s some of what she wrote:

I was very touched to see the author take so much time to study Indonesian and have this book set there as it’s not everyday we see a book set in our neighbouring country! I truly felt the author showed a lot of empathy and effort with the work he produced in this story and I could really feel the author has spent a fair bit of time in Indonesia – I feel it through the protagonist Taj – he is not just a tourist who writes about his adventures later, he truly lived there for a long time, learns the local lingo and social conventions and understands how Indonesia works. The cultural, political and environmental references noted in this book are spot on.

Phillip Gwynne’s first novel Deadly Unna? was a literary hit and was made into the feature film Australian Rules for which he won an AFI award.  He writes for a wide range of age groups from picture books to young adult. His latest book, The Break is available in all good bookstores now.

Enjoy our KBR review of Phillip’s picture book, Brothers From A Different Mother.