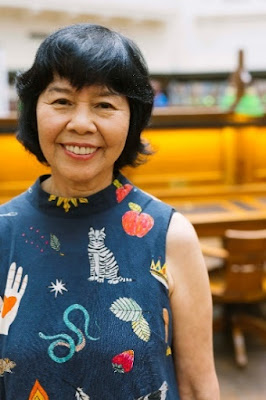 An event to honour Gabrielle’s appointment as the new Laureate will be held at the State Library in Melbourne on Tuesday 8 March at 11am.

Gabrielle Wang: “When I was young my father used to say, ‘What can you learn from a story? They’re just made up.’ I didn’t say anything, but I knew he was wrong. Stories have the power to change us on the inside.

As Australian Children’s Laureate I will be encouraging young people to use their imagination by reading, writing and drawing. Nourish your imagination and a garden of delight will grow.”

The Laureate is the national ambassador for reading and Australian children’s literature. They speak on behalf of all creators and for the entire industry representing reading advocates, educators, librarians, booksellers and publishers. Appointed every two years to promote the importance and transformational power of reading, creativity and story in the lives of young Australians, the Children’s Laureate spends extensive time speaking directly with children, education specialists, government ministers and librarians, in both metropolitan and regional communities across the country.

Every Laureate has a theme for their two-year term: for Gabrielle’s it is Imagine A Story. Through this she will explore four main issues: Imagination, Cultural Diversity, Visual Literacy, and Audiobooks and Reading Aloud.

She says, “Through story we can be inside the head of someone else, even someone with a different culture or way of life to our own. By reading books about diverse characters by diverse authors, young people can not only gain knowledge but also learn tolerance and empathy.”

Gabrielle Wang is an award-winning author, illustrator and artist who lives in Melbourne. Her Chinese heritage has always featured in her work and in her first novel (The Garden of Empress Cassia), published in 2002, the protagonist faces the same problems that Gabrielle herself experienced growing up as a Chinese Australian. Her numerous books all contain elements of Chinese culture, philosophy and mythology and include a picture book and novels for children and young adults. Her work has received many awards and accolades including multiple Aurealis Awards and CBCA Notable Book commendations.

Now known as the ACLF, the not-for-profit organisation was founded in 2008 and launched the first Laureateship in 2012. This important role has been held by Australian children’s literature powerhouses including Alison Lester, Boori Monty Pryor, Jackie French, Leigh Hobbs, Morris Gleitzman and most recently Ursula Dubosarsky.

Children’s Laureates are now active in Italy, Finland, The Netherlands, Ireland, Mexico, Sweden and Wales. There are Reading Ambassadors in New Zealand and the United States.

Chair of the ACLF, Bruce Ellis, said, “The Board of the ACLF is thrilled that Gabrielle Wang has been appointed the 2022–2023 Australian Children’s Laureate. As an author and illustrator of Chinese-Australian heritage, Gabrielle is bringing a fresh and exciting approach to the role. From our first conversation I have been impressed by Gabrielle’s commitment to encouraging children to use their imagination in all different ways – drawing, writing and reading. I can’t wait to see how she enriches the lives of young Australians through the power of story.”

To find out more visit www.childrenslaureate.org.au.