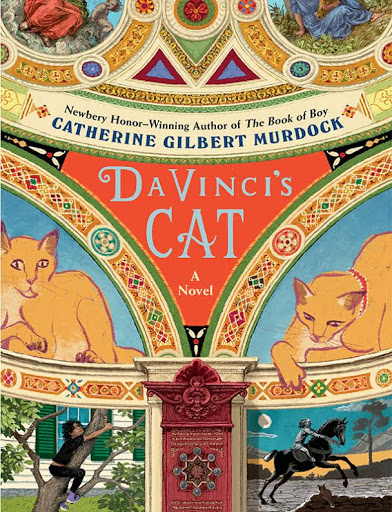 Da Vinci’s Cat
by Catherine Gilbert Murdock
illustrated by Paul O. Zelinsky
Purchased from Barnes & Noble
Michelangelo, Raphael, Bramante and Leonardo Da Vinci (well, Da Vinci’s cat, Juno) are some of the more famous sixteenth century greats who populate yet another historical novel shot through with fantasy from Murdock, author of Newbery Honor The Book of Boy. It is the year 1511 and eleven-year-old Federico II Gonzaga is being held hostage by Pope Julius II to guarantee his family’s loyalty to Italy. However, aside from missing his mother (Isabella D’Este, sketched by Da Vinci, painted by Titian, a patron of the arts and major figure of the Renaissance) and sisters, Federico is having a fine time, treated like the gentleman he is and a frequent backgammon partner for the Pope. Although his servant, Celeste, and his Latin and fencing teachers smack him regularly, Federico is recognized for the royalty he is and his word is his command. While this may make him sound like a little prig, Murdock imbues the young Federico with a touching sense of duty to his father, family and city – Mantua. He has a deep understanding of the importance of behaving (and dressing) like a gentleman to signify rank and standing, as well as the value of money and what it means to have (and not have) it. Federico knows how to behave in a room of adults and, what’s more, he knows how to converse with and even entertain them. His a is muse to Raphael (who may or may not have included him in his famous fresco, The School of Athens, in the Vatican) and even allowed into the Sistine Chapel by the eccentric genius, Michelangelo, to watch him paint. Federico also gets a front row seat for the bickering rivalry between the Raphael and Michelangelo.
When, seeking a midnight snack, Federico travels the quarter mile long corridor (under construction) linking his villa and the pope’s palace, he encounters a cat emerging from an ornately decorated cabinet stowed amongst the tiles and lumber, the adventure begins. In present day New Jersey, eleven-year-old Beatrice Rosetti Bliss, who goes by Bee, or Bomba as Moo, her Italian mother calls her, rushes to stop a cat from killing a songbird. Of course, the cat is Juno, the same cat Federico encounters more than 500 years earlier, and she has sought out Bee, whose mothers are both art historians, for a reason.
Bee, a lover of Rebecca Stead’s When You Reach Me and the Chronicles of Narnia, along with her knowledge of Renaissance art, osmotically absorbed thanks to her moms, is neither surprised to discover a cabinet (in an office hidden behind a swinging bookcase!) that sends her traveling through time, nor shocked when she finds herself in the Vatican at the start of the sixteenth century. She gamely accepts that she looks like, and must act like, a boy, and a servant boy on top of that (as well as pee in a chamber pot and eat spaghetti with cinnamon and sugar on it) in order to work with Federico to "make everything better."
What connects Federico and Bee across 500 centuries is another marvelous layer to this story with excitement, compassion and a little sadness of its own. Divided into four parts, the tangled timelines of Da Vinci’s Cat are not hard to keep track of as you race through this magnificent novel – with superb spot art of Juno at the start of each chapter – to the marvelous ending. Happily, an author’s note gives a bit more detail about the art and history included in the novel. And, if you want to learn a little more, check out this excellent interview with the author where she shares the moment, some twenty years ago, when she and her sister, writer Elizabeth Gilbert, were in Rome talking about cats and time travel…

Some of the art mentioned in Da Vinci’s Cat

A segment of Raphael’s The School of Athens, a fresco in the Apostolic Palace, Vatican City, showing Bramante, the architect of St. Peter’s Basilica in the Vatican, and possibly Federico.

The Book of Boy