Menu
Let's Talk Picture Books
Gibberish by Young Vo is a visually breathtaking look at a young boy’s journey to fit in at his new school. 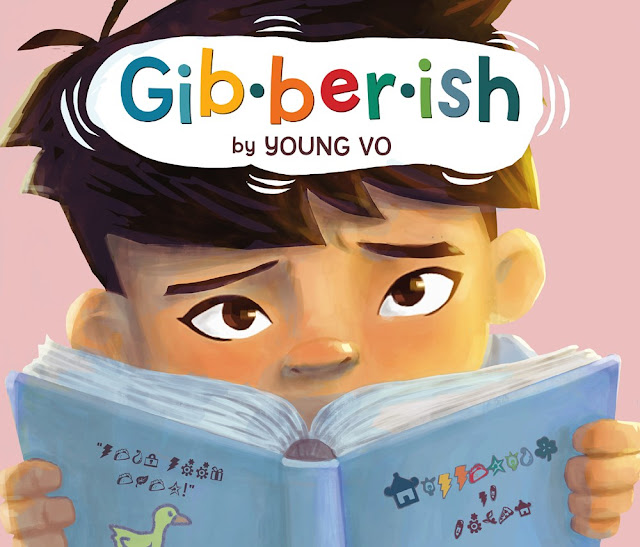 Dat is a little boy who has taken a boat and a plane to get to his new home and now has to undertake the scariest travel of all: the bus to a school full of people–and more importantly, a language–he doesn’t know. When people speak to him, Dat only hears gibberish (visually characterized by symbols on the page) because this new country is completely lost on him: his words break when he tries to speak, he doesn’t have any friends, and can’t understand many of the customs things around him. He feels hopeless until one bold girl decides to become Dat’s friend despite the language barrier and help him find his voice.

The characters, situations, and language that are foreign to Dat are characterized by other worldly features, like shades of gray (while Dat is in full-blown color) and characters who look extremely different than Dat (some only have on eye, others have horns). Reminiscent of Shaun Tan’s Arrival, Dat is in a completely new world that might have some similarities to the one he left behind but also has major differences. Given Vo’s animation background, he takes it all one step further in a most creative way, with the new "foreign" world appearing in an old Disney cartoon style and Dat consistently representing a more modern style of animation. As the book goes on and Dat finds his footing, the rest of the world is brought into his colorful, "modern" world (a transition that Vo allows us to see on the page).