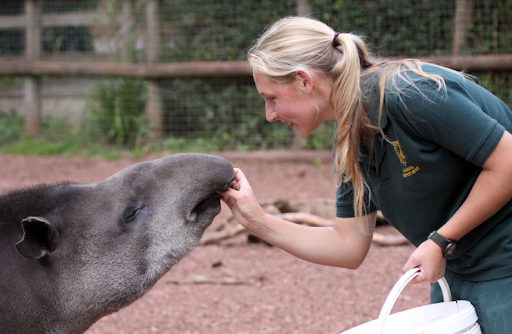 I was 18 years old when I first set off across the world to volunteer my time with an organisation in Sri Lanka, that takes in rescued elephants who have fallen victim to human wildlife conflict. As the elephants’ habitat in Sri Lanka reduces due to expanding agriculture, the instances of elephants coming into contact with humans on farmland increases. The elephants are either taking a historical path that has now been transformed for human use, or are searching for food and have found a farm or plantation. This is when elephants get injured as humans try to protect their crops and livelihoods. I was overwhelmed by not only the elephants’ resilience, but the mahouts’ (traditional elephant trainers) and carers’ commitment to them.

I came home with a new passion for zoology and wildlife conservation, which is what I went on to study in the years to come. I started working as a zookeeper shortly after graduating, caring for a range of species from rhinos to gorillas, tigers, sloths, and pretty much every other animal you could think of! It was an amazing experience and I learnt so much from each and every zoo I worked in, but I still wanted to travel and dedicate my time to helping wildlife and tackling conservation issues.

During my 15 years of working in zoos I have volunteered any spare time I had to sanctuaries, rehabilitation centres and conservation organisations. I worked with manatees in Belize, orangutans in Indonesia, turtles in Malaysia, elephants in Thailand, chimps and gorillas in Cameroon, numbats in Australia and the list goes on.

Only after having my son and taking time away from zookeeping (though sometimes I can certainly feel similarities) did I fall in love with the children’s books I would read to my son during the day and at night. Beautifully illustrated stories of adventure, and I started to wonder if my love of nature, wildlife and conservation could be turned into a children’s book to inspire kids to care for these things as much as I did.

Environmental education was also important to my sister, Jess, who as an artist often depicted wildlife and their struggles. We decided to join forces to help young kids understand the importance of the natural world and protecting our wild places and the wildlife that lives there. Teaching the next generation to live in harmony with nature and to protect our natural resources has never been so important.

After developing a concept for the story and the main characters, who are modelled on our niece and nephew, I started to write a tale of a mother Koala and her Joey who become homeless due to a bushfire and need the help of the two little zookeepers and a local conservationist named Waru to find them a new home.

Once the story had been edited several times it was time for Jess to bring it to life with her illustrations. It took us a little over a year to completely create and format a publishable children’s book and now it is time to bring this book to print. During this time, we have been lucky enough to have met a bunch of other authors and learnt a lot from their experiences. Who knew children’s book writers are such a big crowd, and a very supportive one?

Lorraine (Lainy) Miller is a zookeeper, wildlife conservationist, and mum of one turned author. Originally from the UK, she currently lives in South Perth, WA, with her partner and 2-year-old son, who (spoiler alert!) also happens to love animals. Lainy long contemplated writing about her wonderful and sometimes crazy adventures while caring for wildlife, but ended up writing a children’s book instead.

Jessica (Jess) Miller is a teaching assistant, artist and newly established children’s book illustrator living in Plymouth, UK. Jess has previously worked on several projects to showcase the plight of wildlife around the world, including  The Great Big Rhino Project. She illustrated the book with a combination of traditional art techniques to achieve modern and lovable characters.

‘The Zookeeper’s Quest – The Koala and the Bushfire’ will be published in early 2022.