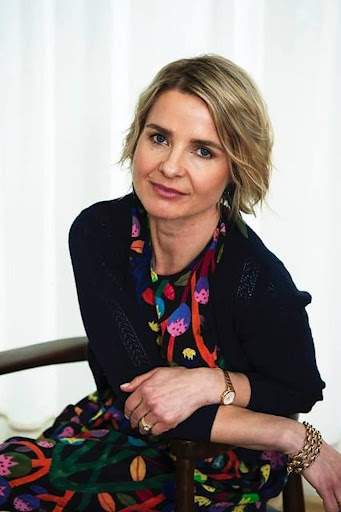 Sophie Laguna‘s first children’s book in ten years, The Song of Lewis Carmichael, illustrated by her husband Marc McBride, is a magnificent journey deep into The Arctic, but also into the depths of the human psyche.

Sofie tells us about the genesis of the book and what writing  it means to her.

I remember sharing the idea for The Song of Lewis Carmichael with my husband when we were on a holiday together about five years ago. I told Marc all about a boy who travels by hot air balloon to the ice, to find a lost baby.

I described the pictures I saw in my mind: a flock of snow geese carrying a balloon, polar bears thundering across the ice, a cave of dangerous Arctic wolves, the antlers of reindeer resembling the branches of trees. We discussed the possibility of Marc doing the illustrations for this story set in the snow. I was really excited and I began to write it when we returned from our holiday.

I can’t remember exactly how much I wrote, before another book for adults took over! But the story never quite left me alone, and as soon as there was space, I began the story again, in earnest. I was determined to complete it, before more demands were made on me with other books.

It was a real pleasure to escape to The Arctic each time I wrote. I needed ice! I needed polar bears, walruses and Snowy Owls. The more I researched The Arctic the more excited I became. The North Pole is always moving!

As far as why I wrote a book for children again after so many years – well, the story was there, asking to be told.

I just followed the feeling in me. I didn’t ask if the story was for younger readers or older readers, I just knew I wanted to spend time with a crow who could speak, and a boy who needed a friend.

It was exhilarating. It was also a very emotional journey. I felt Matthew’s pain quiet acutely. And I loved the friendship that he developed with Lewis. It meant the world to me, and still does.