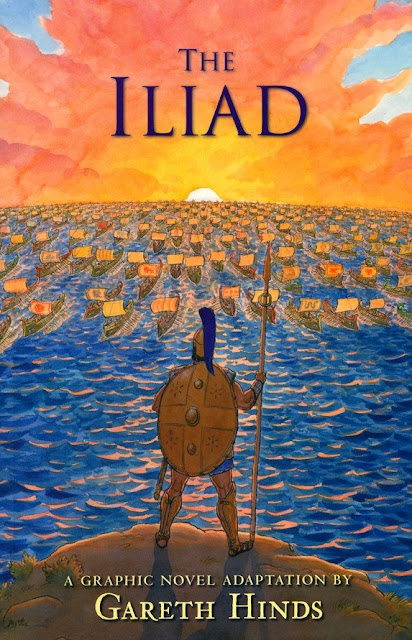 This is a review of The Iliad – graphic novel edition adapted by Gareth Hinds.  A great condensed version of Homer’s poem of gods and mortals at war.

A decade long war rages and terrorizes the families of Troy and Greece, as their families are torn apart by the Trojan War. Will the nightmare ever end?

Do the words Helen of Troy, Trojan War, or at least Achilles heel sound familiar to you? Let me give you a background.

Paris, Prince of Troy, was promised the hand of Helen, unaware that she was married to the King of Sparta. Paris stole Helen and whisked her away to Troy, prompting a years-long battle that rewrote history between the Greeks and Trojans.

The Iliad focuses on the tension between Greek King Agaemmon and the mighty Greek demigod Achilles.  Agaemmon had taken the daughter of an important priest favored by the gods and refused to return her.

Achilles stood against this, and therefore did not head into battle with the rest of the Greeks? With Achilles not-present, does this offer the Trojans an advantage or will it end up dooming them all?

The Iliad by Gareth Hinds describes the fierce warriors of Troy and Greece and how they would never stop fighting for the cause that they believed was right. It opens you to a connection with the Greek Gods and who they favored, usually ended up having quite unfair advantages in certain battles.

This vivid graphic novel by Gareth Hinds is the perfect way to enter yourself into the harsh setting of the Trojan War and the realm of a classic story.