I am so pleased to present my interview with Pam Fong, creator of the wordless picture book Once Upon a Forest. This is Pam’s second picture book, and this time she’s tackling something very personal and important: an appreciation for nature! I hope you enjoy our chat and deeper look at this lovely book! 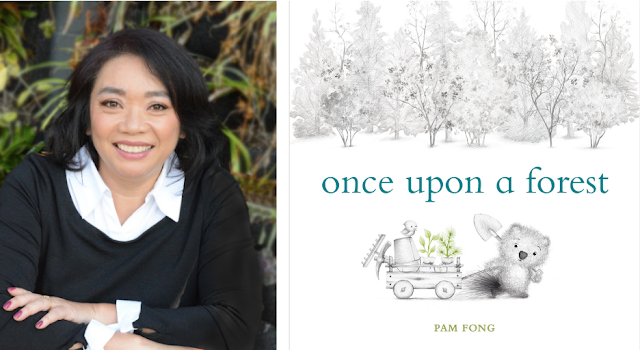 After a fire leaves the forest smoldering, a determined marmot and her resourceful bird friend set off on a rescue mission in this beautifully illustrated, wordless story. They clear away fallen branches and scorched bushes. They rake and dig and plant new seedlings in the earth. With determination and ingenuity, as the seasons pass, they care for the little trees by making sure they have enough water, protect their branches from the wind and snow, and keep away hungry creatures, until the trees can thrive on their own. With a little time, care, and hope we all can help the earth.
Let’s talk Pam Fong!

LTPB: Where did the idea for Once Upon a Forest come from? What inspired the story?

PF: I love hiking. One of my favorite places to go is the Sierra Nevada Mountains, north of my home in San Diego. On almost every hike in that area, I will encounter a marmot. 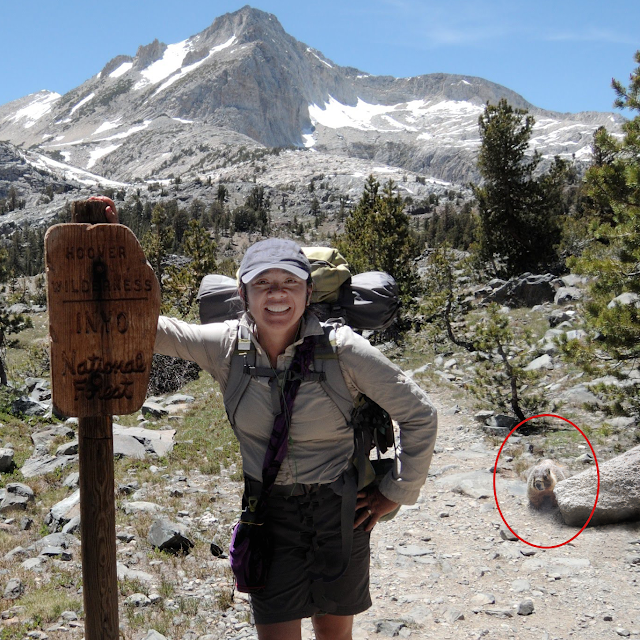 A few years ago, I was hiking Mount Whitney. I was setting up camp for the night. It had been a long day of sun and altitude, and I was beat. Out from under a rock a marmot appeared. It waddled towards me and plopped down right next to me. It had an expression on its face that said, “Yep. I’m exhausted too.” And we both sat there, for a long time, quiet and exhausted.

I spent that night in my tent imagining marmots taking constant care of the vast forest. That campsite encounter, and the fact that in Southern California we are constantly battling forest fires, is what eventually led to this story. 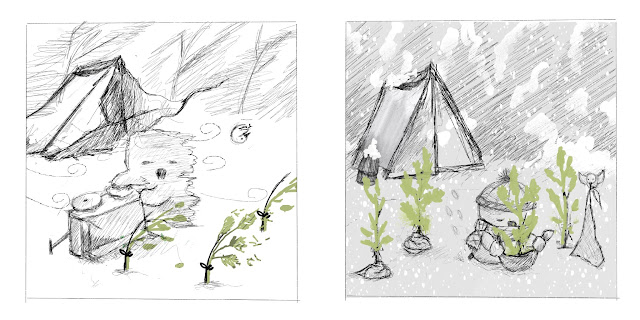 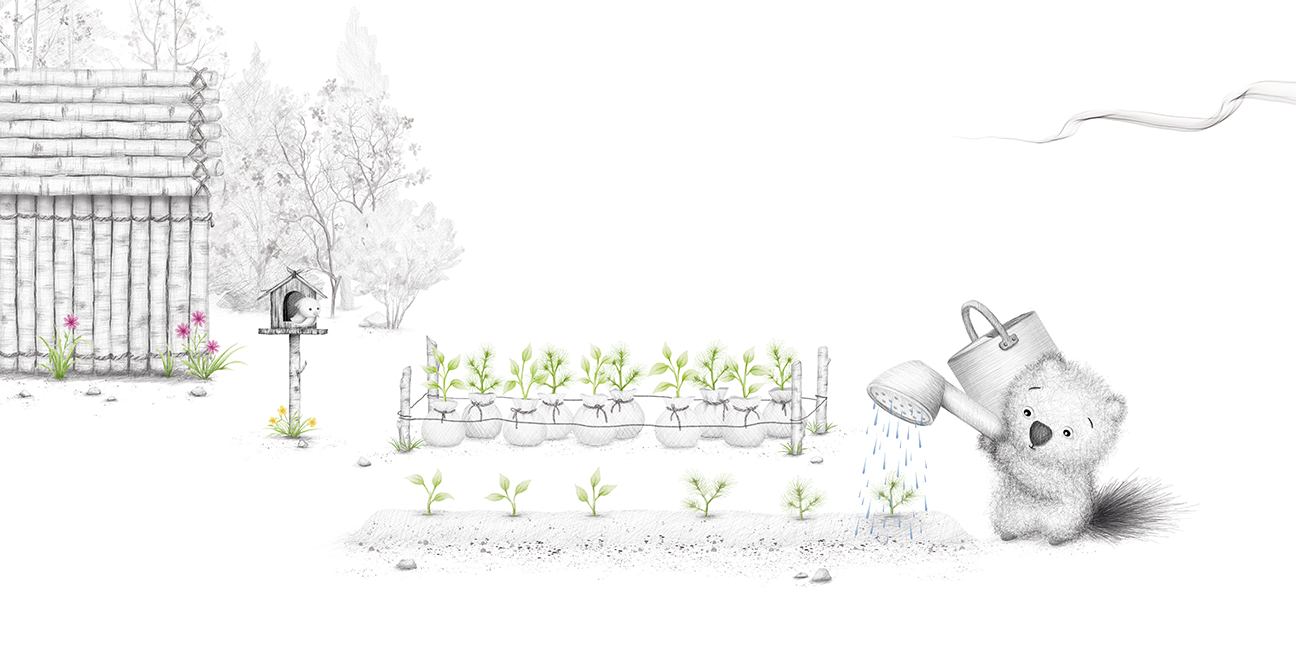 LTPB: Did you always know it would be wordless?

PF: Yes! This one began with a quiet marmot, and it stayed that way. I never considered words. I wanted to capture the calm and serene feeling one finds in nature, especially deep in the forest. It’s quiet. Adding text would have broken that feeling.

Also, I love negative space. I considered the white areas as much as I considered what I would draw. Having preserved as much white space as possible, I couldn’t see filling it with text. 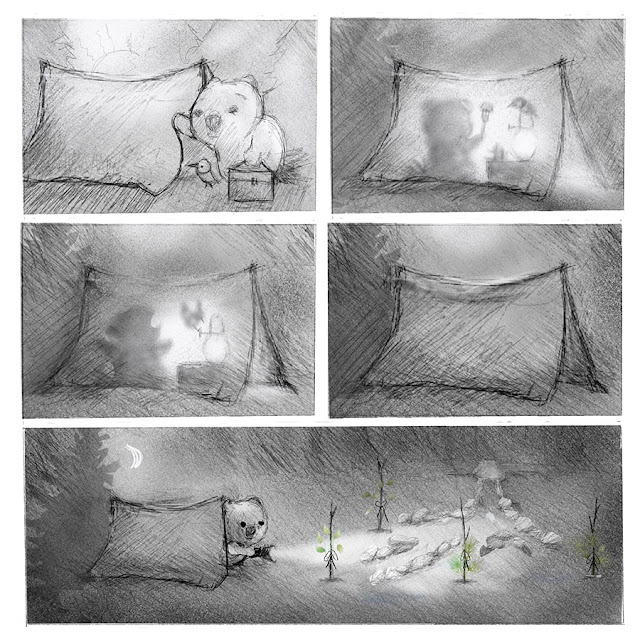 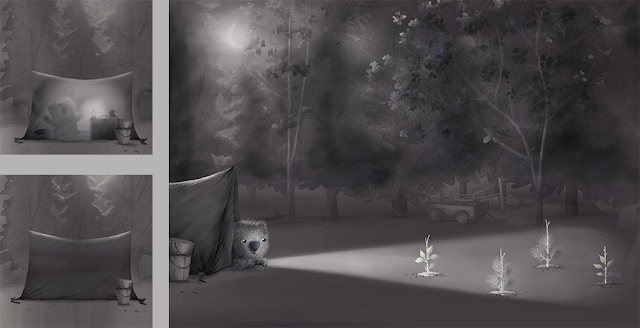 LTPB: Can you talk a little bit about the visual evolution of the book? Did you always intend to create the images in black and white and add spot color?

PF: I love black and white. It’s so much fun to draw in values. The characters have always been in black and white and I never even tried to add color. Marmot’s fur is made up of many, many thin, frenetic lines. When they cross each other, there is a depth that is created that I did not want to disturb with color. Adding spot color was suggested by a friend, and it was a great suggestion: in addition to Marmot and Bird, Nature is the third character in this story and deserves to stand out, perhaps the most. 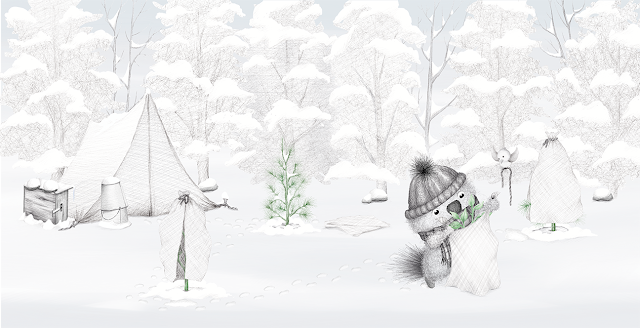 LTPB: What did you use to create the illustrations in this book? Is this your preferred medium? How does your process change from book to book?

PF: My character studies always start with pencil and paper, where I am just trying to capture the shape of the character in broad and rough studies. Then, I moved to digital. 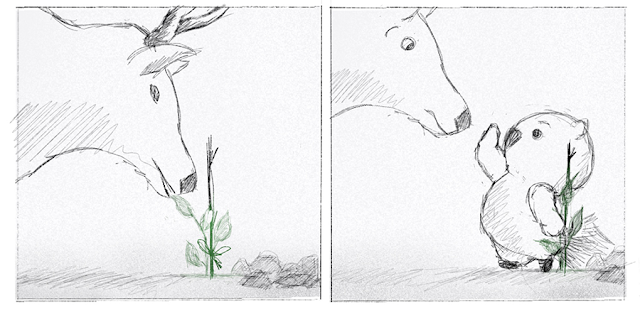 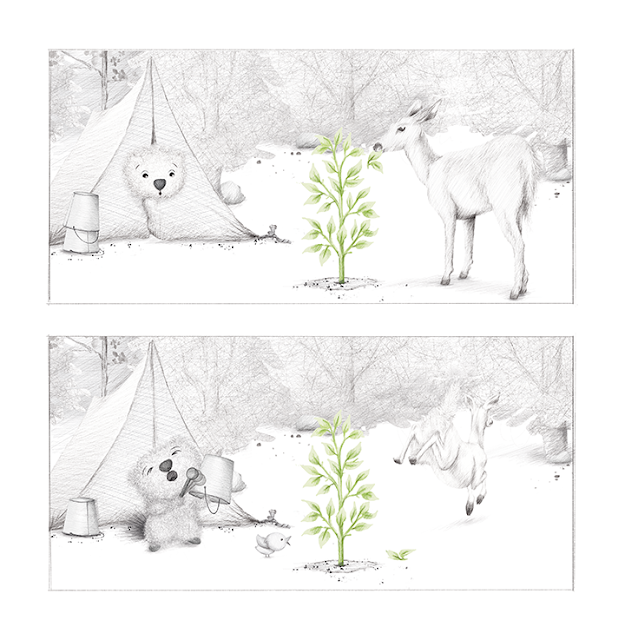 I create the individual elements in Procreate and then compile the scene in Photoshop, using my Cintiq. This allows me to preserve the layers so that I can play around with composition. Some of the spreads contain more than 200 layers. Working digitally allows me to quickly try options that pop into my head until I settle on the one I like. For Once Upon a Forest, we had to warm up the green of the plants. That’s easily done when the work is digital. 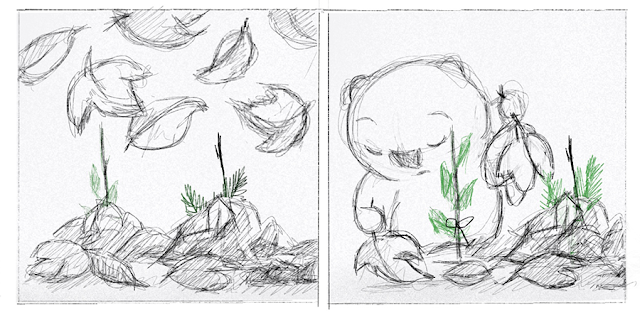 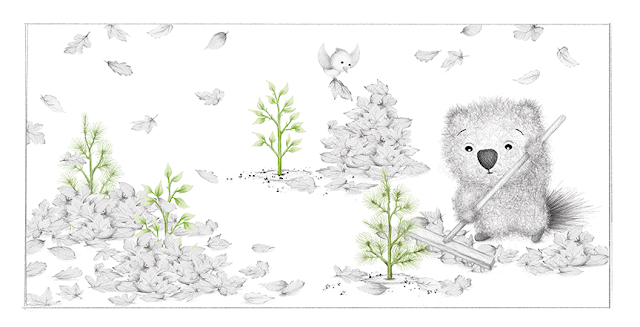 My process (so far) has been similar throughout my books, except that some of my other stories have more color, but still, a limited palette. I’m exploring other styles as well. For me, I let the tone of the story make a lot of my style decisions. 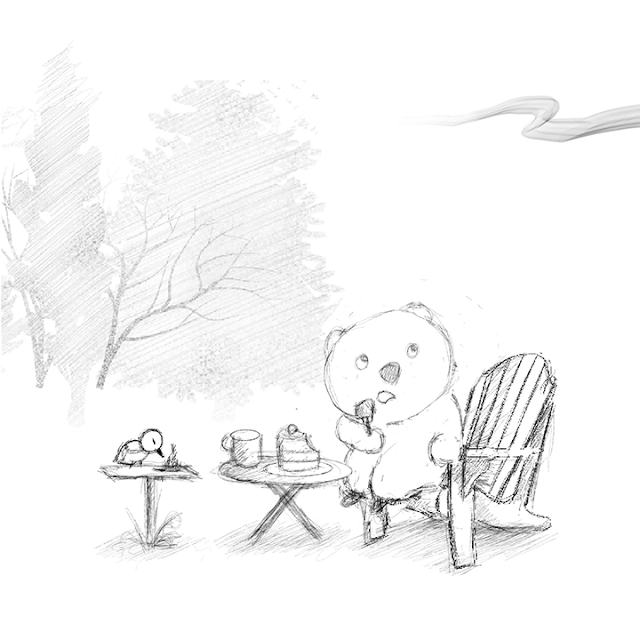 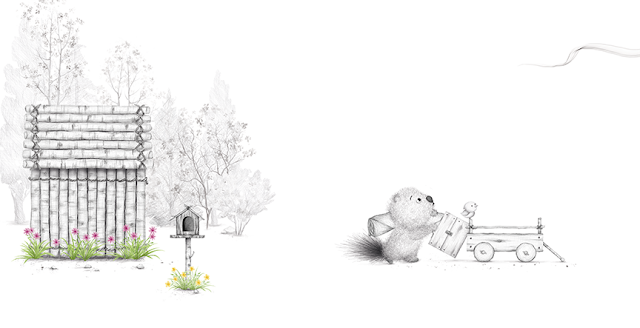 LTPB: What are you working on now? Anything you can show us?

PF: I have a book called, A Spark in the Dark coming out later this year. Following the journey of a little fish, the story is about finding your way when surrounded by darkness.

I’m also really excited about a project called, The Clock, which is my first attempt at a nonfiction picture book. It’s the story of a famous building and its clock that loses their usefulness, but regains new value in the end. I am playing with some final pages before submission, like this one: 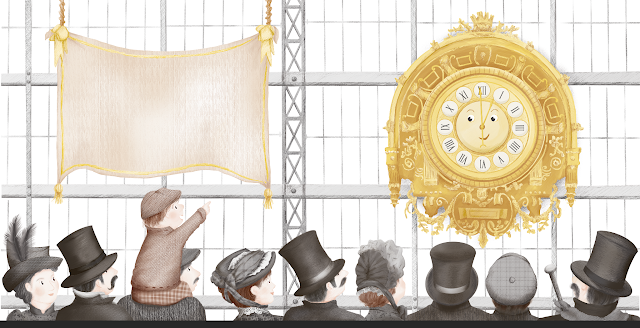 LTPB: If you got the chance to write your own picture book autobiography, who (dead or alive!) would you want to illustrate it, and why?

PF: I love this question, and picking one illustrator is hard. I think it would have to be Marla Frazee. With just a few simple lines, she will capture my energy and make me look adorable!

A big thank you to Pam for talking to me about this precious wordless book! Once Upon a Forest published in February from Random House Studio!
Special thanks to Pam and Random House for use of these images! 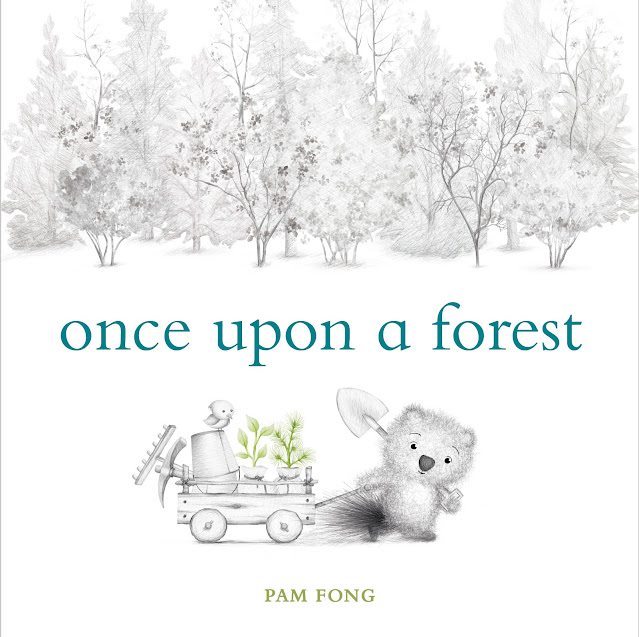