Menu
Let's Talk Picture Books
I was lucky to catch up-and-coming author-illustrator Dylan Hewitt to talk about his newest book Giant Giant! Dylan has a keen eye for color, especially complementary colors, and this book is no exception. I hope you enjoy our chat and a peek at what’s coming up next for Dylan!

Every day, a giant spreads terror among the villagers of a peaceful town. He commands them to wash his underwear and to cook large feasts for him, or else he will stomp on the entire village! This demanding giant does not seem to have a worry in the world. But his misfortune is about to strike, as a giant even more gigantic than him is about to take over.
Let’s talk Dylan Hewitt!

LTPB: Where did the idea for Giant Giant come from? What was the biggest challenge in creating it, and what parts of the book are you most proud to share?
DH: It was more just a visual thought at first. Which actually, randomly came from looking at my publisher’s logo one day – not the most out-there inspiration story you’ll ever hear, I know. They’re called ‘Comme des géants’ (Like Giants) and their logo is a giant’s big red boot. It gave me a layout idea, I liked the thought and scale of a little chap looking up, vulnerable, at a massive boot taking up most of the page. I had no idea about a story at that point and there are loads of stories about giants so I wasn’t sure if it would become anything.

The thought of the giant looking up in the same vulnerable way to an even bigger boot came to me at some point, not sure when or if I was even thinking too hard about it. Once I’d come up with that the story came quickly after, the little giant had to be treated in the same way he treated the little villagers – to learn his lesson. There’s always someone bigger and badder than you, so best to be nice.
The ideas for how to execute some spreads seem to flow fairly easily but there are always annoyingly challenging ones. My style is supposed to be a simple one so when layouts get too trixsie they need to be worked on more to get them clear and uncluttered. It takes longer to make things simpler, decisions have to be made and I have to do quite a few versions to get it so I’m happy with it. 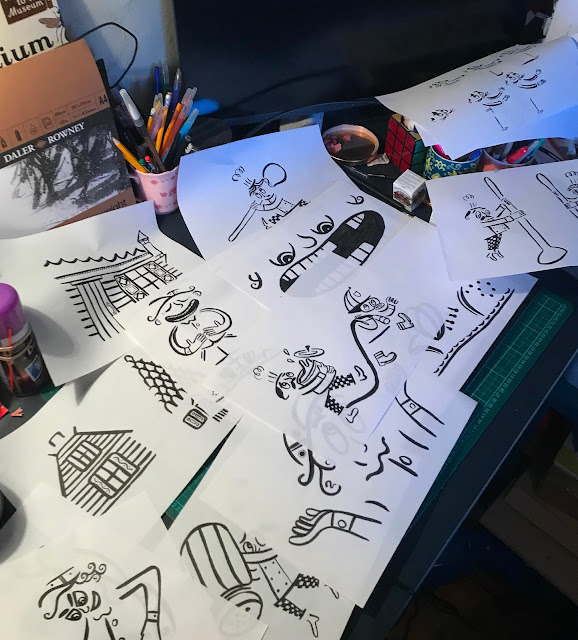 The other big challenge was deciding what the giant giant looked like. I had an idea of the little giant being a naughty boy type character straight away but didn’t really have a visual thought for the giant giant – other than his big Doc Martins style boot. I did play with not showing his face at all, just showing his big boots and that’s it. But in the end felt you need to see his big mustached face to have an emotion towards him. One of my favourite spreads is the giant giant crying his eyes out with massive tears. I think it’s harder to hate him when he’s balling like that.

LTPB: What differences have you found between creating a picture book on your own (text and illustrations) versus illustrating someone else’s text? Do you find that you prefer one over the other?
DH: Both are rewarding for sure. It is nice to bounce ideas off someone else though. It’s also easier to like someone else’s ideas for some reason – bit easier to be objective I guess. But I do get a bit more satisfaction thinking of the idea and making it happen – especially seeing it printed and holding the book in my hands. Slightly surreal feeling to look through the finished, printed book while seeing the sketches scattered around the desk. 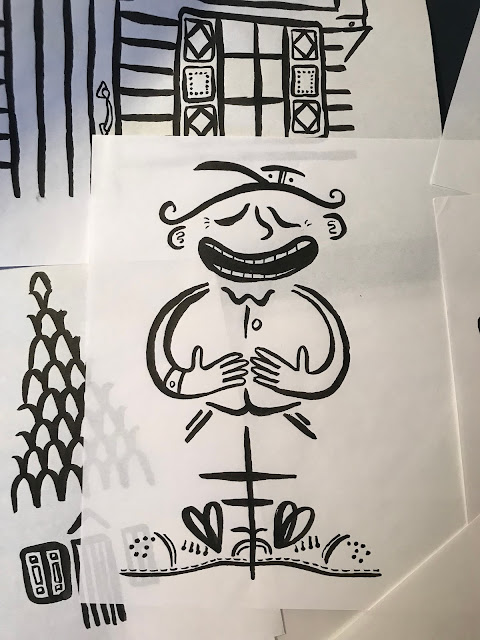 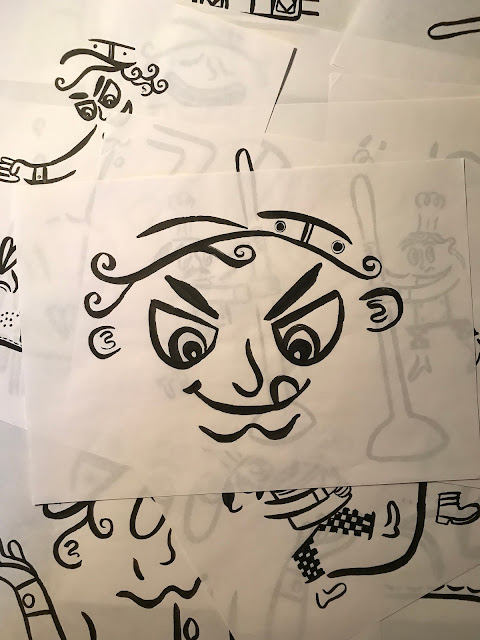 Overall, I think the idea is the most important thing – even if I’m not the writer it’s still the most important bit. The illustrations are obviously massively important and can sometimes be better than the idea or make a bad idea seem good, but still, the base is the idea, so without it there’s nothing. So if I like an idea I’ll happily illustrate it, whether I had that idea or not. I’d also be interested in just doing the writing bit too. I have a few story ideas that I don’t think I’d be the right person to illustrate. It’d be fun to see how another illustrator brings the idea to life. In the end it’s all about the ideas for me.
LTPB: What did you use to create the illustrations in this book? Is this your preferred medium, and how does your process change from book to book?
DH: Paper, scissors, ink (or brush pen) a scanner, a lightbox and a laptop. I sketch things out first, pretty much the layout for the whole book, then start doing them properly. It always, always changes as I go from there. When it comes to the actual illustrations I cut shapes out of paper with scissors – I could use a scalpel but I prefer the crudity of the scissors (the shoddy ones I have anyway). Then, separately I scrawl the lines with a brush or brush pen and scan everything in. So there’s a bit of an aligning stage that happens on screen. I like that things don’t fully line up, it gives things a nice screen print, classic feel. I even like little mistakes here and there, too much polish takes away some charm I think. 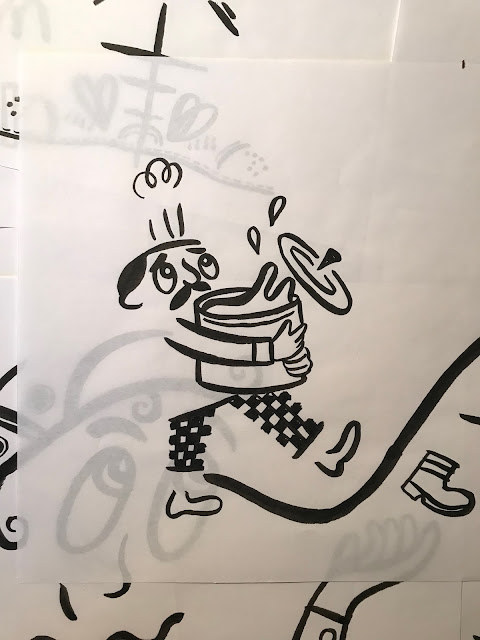 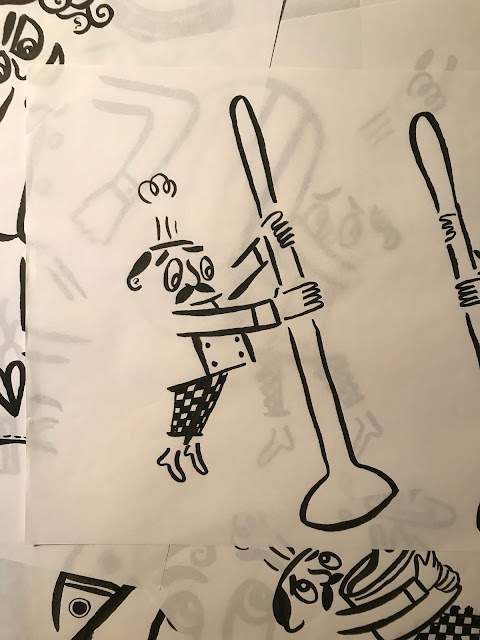 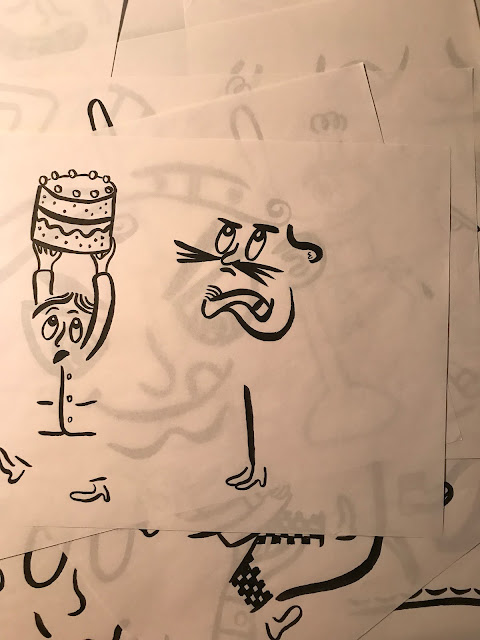 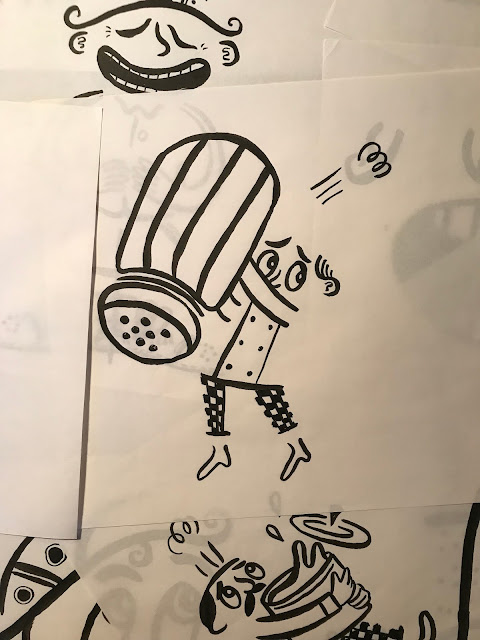 My style overall is bold colourful shapes with ink lines on top, so I’ll stick to that as a base for my work. Any book I illustrate will definitely have that in common. So far the shapes have been paper but I’m working on a book now with everything done in ink… I know, true story, crazy. 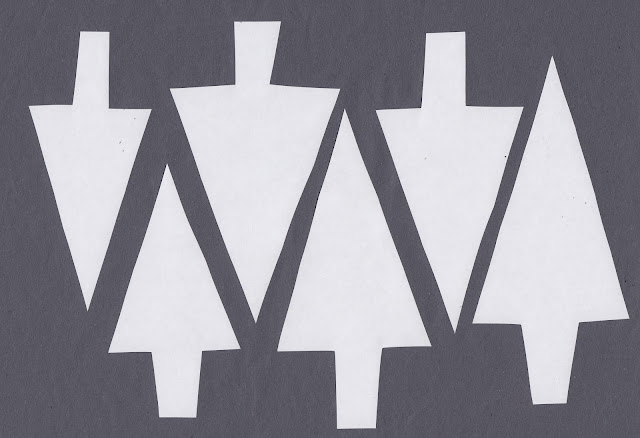 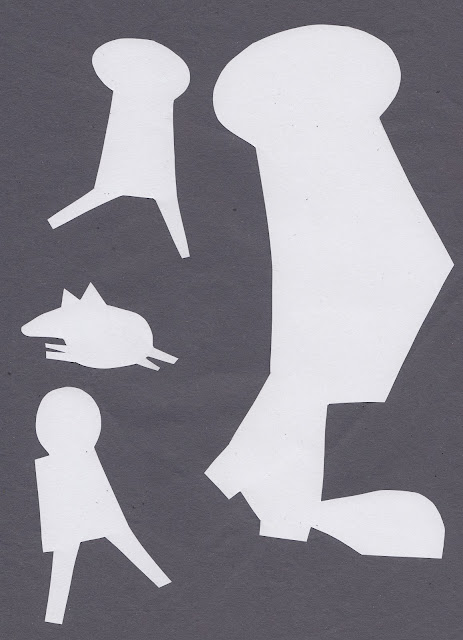 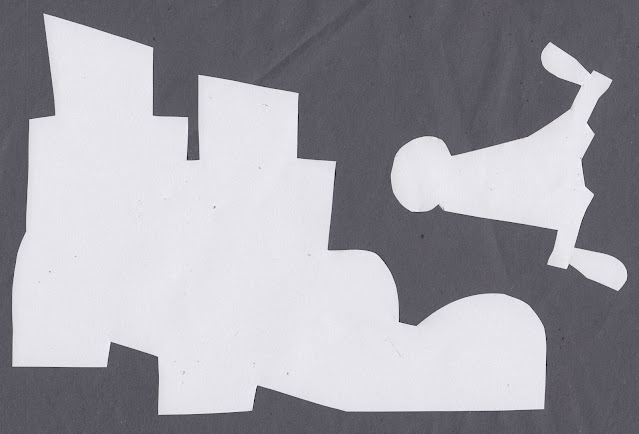 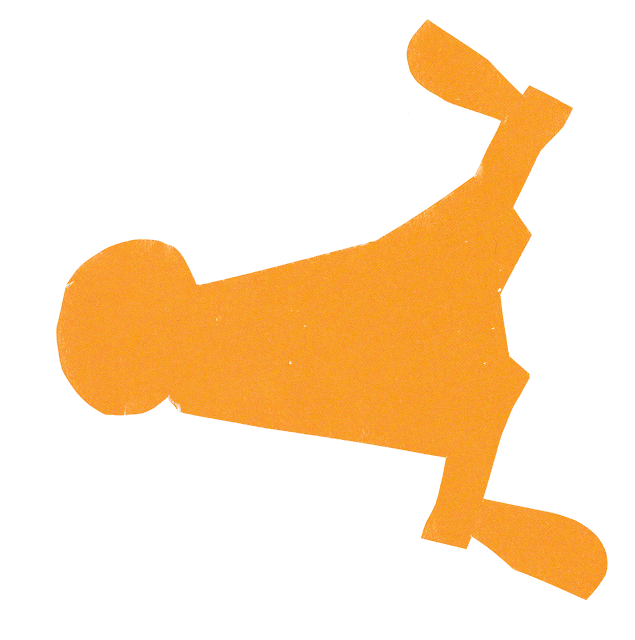 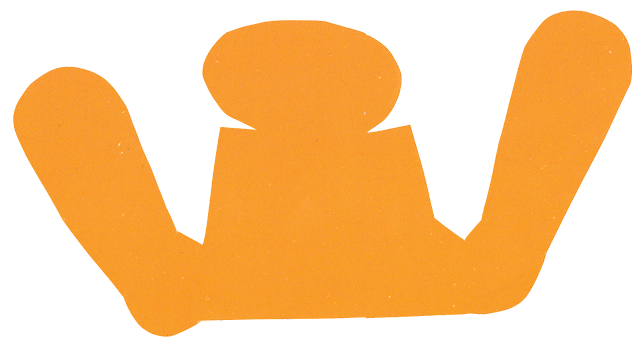 LTPB: What are you working on now? Anything you can show us?
DH: I’m just finishing a book called Bedtime Mummy, which will run in Spanish in Argentina (Periplo is the publisher) very soon. The idea is to get children to read a bedtime story to their mums – or at least play with that idea. I’ve not seen that before and thought It was a nice intro to reading for them. It’s written with simple words and has a nice easy flow to it. It’s a very calm book… until the end 🙂 That one should be coming out in April I think. 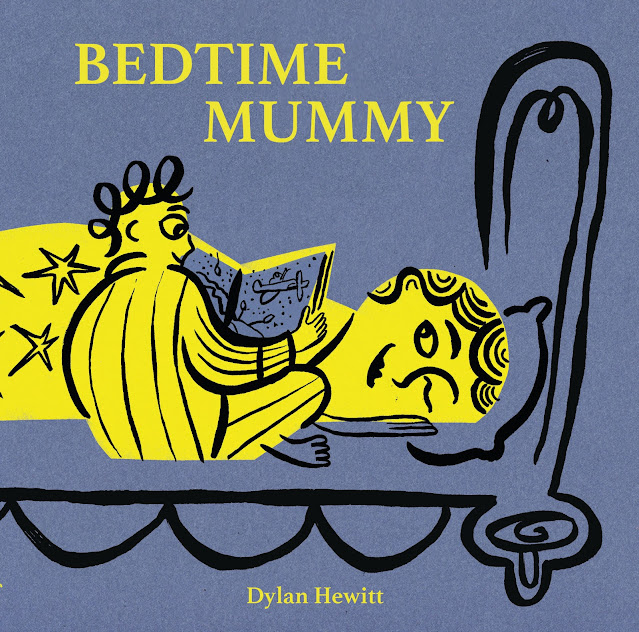 One idea which I’m desperate for a publisher to buy is This is not a carrot – a Magritte-inspired story of an increasingly agitated, tummy-rumbling bunny looking for a carrot to eat. We’ll see, it’s definitely one I think ‘will kids get this?’ That said they usually get everything, smart little brats 🙂 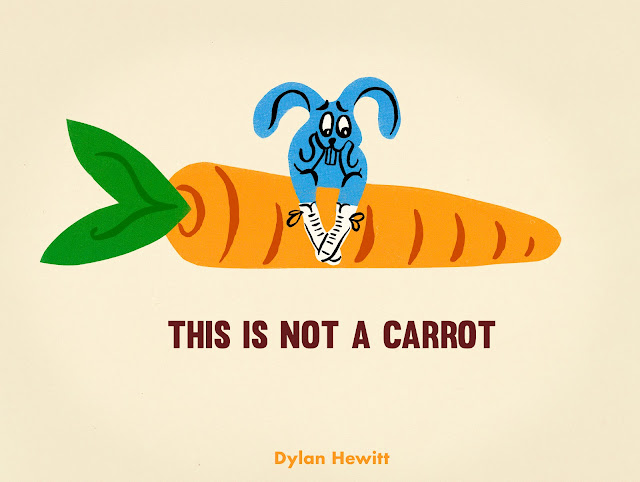 LTPB: If you got the chance to write your own picture book autobiography, who (dead or alive!) would you want to illustrate it, and why?
DH: Right, first thought would either be Miroslav Sasek, Abner Graboff or Maurice Sendak. Coz I’m all retro and that. They all create great moods and have been big influences for me. BUT, there’s a book called The Pirates Tale which I had when I was little – it’s my favourite book and still have it. It was written by Janet Aitchison when she was 5 years old and illustrated by Jill McDonald. It’s mad and pretty much a child’s stream of consciousness. The drawings are the standout though – something super immersive about them for me and that’s who I’d want drawing my autobiography. It also has the best ending of any picture book that ever was – ‘The pirates died. The cat died.’ (sorry for the spoiler). 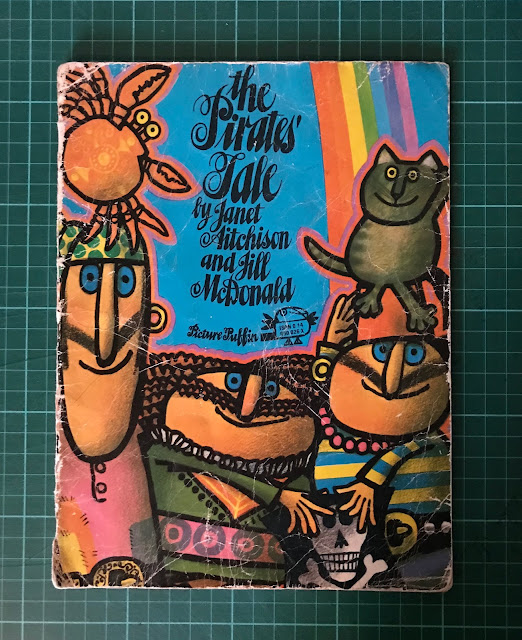 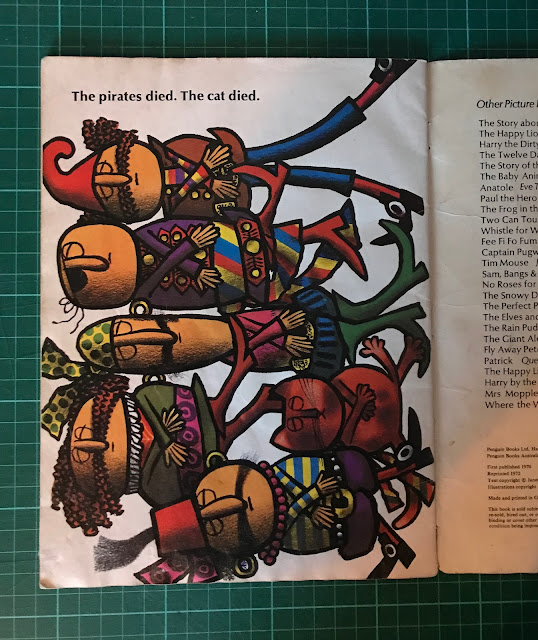 A million thanks to Dylan for taking time to answer some questions about this giant book! Giant Giant publishes one week from today on May 3 from Milky Way Picture Books!
Special thanks to Dylan and Milky Way for use of these images! 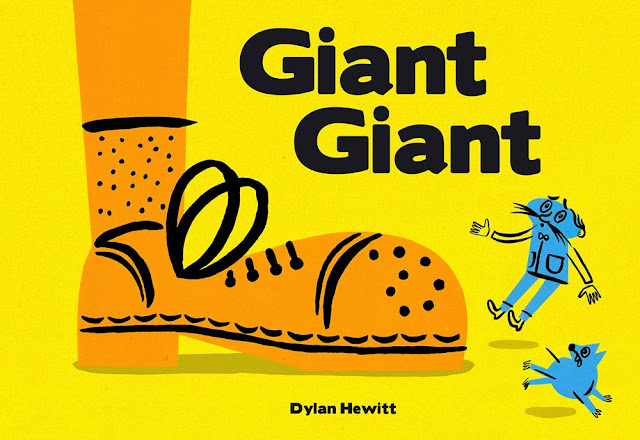