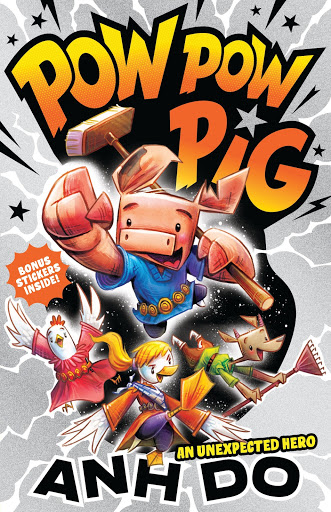 It is 2050. Although scientists have eradicated diseases, chaos reigns in the world.

Piccolo, known as Pow Pow Pig, has been taught to always help others. He and his animal group of friends, Danielle Duck, Chelsea Chicken and Barry the Goat, have joined CHOC – Creatures Helping Other Creatures, to make the world a better place. Learning skills to be of use to others in need, is their mantra.

Pow Pow Pig’s time hasn’t been utilised to learn training of the usual kind. His allocation was the kitchen. That’s where he met his friends. He is an ace at cooking, cleaning and washing up!

After failing repeatedly to get into classes for other skills, the group decided to reinvent themselves.

Pow Pow mastered the use of a broom as a staff. Danielle Duck, persistent as ever, perfected the use of a tea towel as a Kung Fu whip and was renamed Kung Fu Duck.

The charming and super clever Chelsea Chicken, with her Mixy Fixy, can repair anything. She is transformed into the dancing Cha Cha Chicken. Barry the Goat perfected the art of leaf-raking with fast-paced perfection. He remained Barry.

After three years at CHOC, Graduation Day arrives. At CHOC, each animal is graded in teams alphabetically; A being the best, and Z the worst. Pow Pow knows his parents will be disappointed.

Names are called. Teams are announced. The friends wait. And wait. Z is followed by silence all the way home.

The friends refuse to accept defeat. They continue to train using their own method and weapons.
When a huge explosion takes place, Chief Instructor Carmel can’t find any of the leading animals.

Saving the world now depends on Pow Pow and his friends. They must use a hidden Time Machine to go back to 2030, and reverse the vote to stop helping the poor.

With hope their only weapon, they set out.

Nothing is as they expect. On landing, eight hours are needed to recharge the Time Machine. During this wait, Cha Cha finds a red handkerchief. On this evidence, they are arrested for kidnapping the Princess Tiny, about to be crowned Queen.

They fight buffalo guards and giant crocodiles from the moat in order to escape and find the Princess.

Having to rely heavily on Barry’s extraordinary sense of smell, their own courage and resourcefulness, and refined skills with their cleaning tools, can the friends manage to overpower the giant lizard guards, save the Princess, and flee in the recharged Time Machine?

But where has the Time Machine made its second landing? Certainly not in 2030!

In this new series, Anh Do shines a light on important issues such as class distinction, consumerism, waste, wars, poverty, environmental protection, and the value of hope and friendship.

This will be added to his plethora of successes. Full of optimism and acts of kindness, this new bunch of characters are ideal role models for children to learn from.