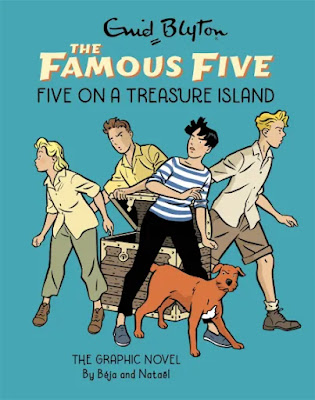 If you’re of a certain age, and perhaps even if you’re not, then you’re probably familiar with The Famous Five.

Written by the prolific Enid Blyton, the first book in the The Famous Five series was originally published in 1942 and followed by twenty more.

Released this month for the first time in English, are graphic novel editions of the first two stories in the series. They were first published in France where another four stories have also been released.

They are somewhat abridged in their retelling, created by the father and son team of Natael and Beja, to bring the stories of the adventuresome group of children to a new lot of readers.

Five On a Treasure Island introduces readers to three siblings, Julian, Dick and Anne, who arrive to spend the summer with their aunt, uncle and cousin Georgina, whom they barely know. 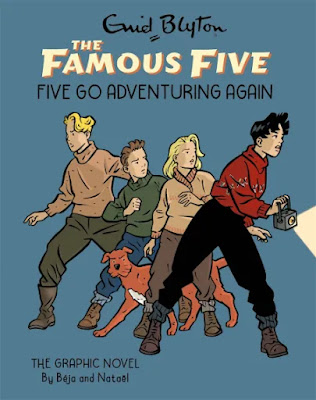 They quickly learn that Georgina will only answer to George, and has a dog named Timmy who her parents are unaware of. As the four children and dog (the Famous Five) explore nearby Kirrin Island, they discover a map and the possibility of hidden treasure.

In Five Go Adventuring Again, the cousins are on holiday again, but have school work to do to improve their grades. They still manage to find time to uncover a coded message and a secret passage.

Despite the retelling, the stories remain a product of their time, with dated concepts and stereotypes. However, whether or not you think of The Famous Five fondly, these books are a chance to engage newly independent readers and build their reading confidence. They can also help connect them with the mystery and adventure genres, encouraging them to move on to read other books in those genres.

The illustrations for these graphic novel editions are fitting for the time period in which the stories were originally set, the 1940s. The style is quite reminiscent of Herge’s Tintin, which is perhaps unsurprising given that illustrator Beja was passionate about Tintin as a youngster.

The Famous Five graphic novels offer a great alternative for young readers who have been enjoying classics like Asterix and Tintin, or other newer, highly illustrated stories like those by Dav Pilkey and Anh Do.