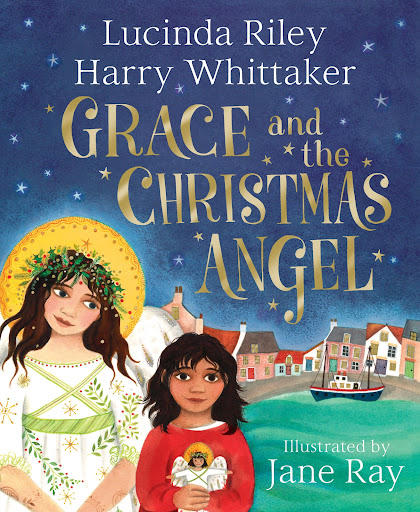 Grace and the Christmas Angel is a special festive story.

It’s about Grace who has a mum and a dad, and a little brother named Nicholas. And it’s about a Christmas angel who has a special task on Christmas Eve.

Grace is especially excited about performing in the Nativity play at school. She has a starring role.

She’s also nervous about performing. What if she forgets her words?

Excitement and nervousness are to be expected on such a big occasion, especially when you add anticipation for Christmas.

The only problem is that Grace’s dad is the captain of a fishing boat, and he’s not home yet.

When things don’t turn out as Grace hoped they would, she lays in bed trying to sleep but unable to when there’s a big storm and she’s worried about her dad. Someone is listening though.

The Christmas angel hears Grace and finds her dad. The result is a surprise for Grace and her mum and brother on Christmas morning.

The story is the first in a series by mother and son team, Lucinda Riley (who is the author of bestselling novels for adults) and Harry Whittaker. Lucinda planned the stories, and Harry wrote them. Sadly Lucinda died earlier this year.

Illustrations are by Jane Ray who has illustrated dozens of children’s books. They are beautifully hand-painted — colourful and detailed — and have a traditional feeling which fits well with the hopeful Christmas theme.

Reading Grace and the Christmas Angel will help get you in the Christmas spirit, and it would make a lovely gift for family and friends.