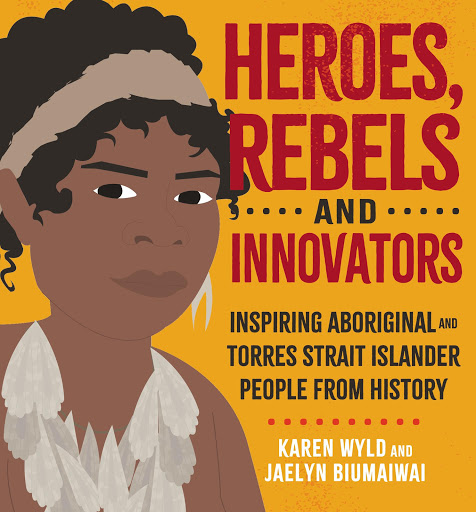 Heroes, Rebels and Innovators, is a collection of seven stories on inspiring Aboriginal and Torres Strait Islander people from history. It reveals and profiles, the lives of extraordinary people and their achievements during Australia’s early years of colonisation.

A young Darug woman, Patyegerang, met William Dawes who studied the stars; a Lieutenant of the First Fleet. They taught each other their language and together they created the first books featuring Aboriginal languages.

Bungaree dreamed big and lived to see his dreams a reality. Proud and confident, he accompanied Matthew Flinders around Australia.

Flinders spent his days drawing maps and his nights mesmerised by Bungaree’s tales. A strong friendship formed with both Flinders, and his cat Trim.

Recognised as a diplomat and explorer, Bungaree was given the title King of Broken Bay by Governor Macquarie. But no monument was raised in his honour.

Tarenorerer was taken by white sealers and forced into slavery. She escaped to witness the destruction of her land by white people.

Fearless and daring, she led armed attacks on the invading settlers, earning the name Amazon of Van Diemen’s Land.

Heroes of Gundagai is what Yarri and Jacky Jacky were called. They warned the settlers that building too close to the flood plains would be catastrophic. Nobody listened. When floods came, seventy lives were lost. The two friends saved many of the townspeople after they clung to trees and rooftops for days before they were rescued.

Newlywed Mohara Wacando-Lifu was on a boat when Mahina, the greatest tropical cyclone hit. Courageous and strong, separated from her husband, she saved two sailors she came across in the water. They clung to her as she swam seven hours to reach the shore.

She became the first Indigenous woman to be awarded the Royal Humane Society’s Gold Medal for Bravery.

David Unaipon was one of nine children. A man of many skills and talents, he was also a writer and inventor. But he was unable to secure funding for his nineteen inventions.

The first Aboriginal author of Ngarrindjeri stories, he also gave talks at universities. He is honoured with his image on the fifty dollar note.

Fanny Bulbuk Yooreel was a resistance fighter and environmental protector, who tried to teach white people how to care for the environment. She took her role seriously, always protesting against things that were sacred to her.

These are only entrees offered, taken from the valuable lives of these inspiring people who have so much more to reveal. Some may be unfamiliar, but this book will encourage readers of any age, to learn more about Aboriginal and Torres Strait Islander people.