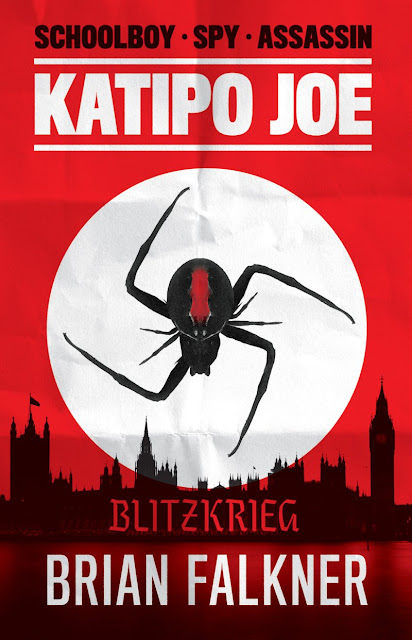 Despite having had Brian as a visiting author at both of my last schools, and I might add, you would never regret doing so yourself – this guy has even the most blasé of senior boys eating out of his hand! – I hadn’t got around to reading either of the first Katipo Joe novels. I’m not only grateful for the opportunity to review this third in the series but will now go back and read the earlier ones.

I think anyone in a school library will admit that frequently there can be a dearth of really gripping, exciting fiction that will engage the interest of older boys, those reluctant readers who will stick to the same adventure series they read back in upper primary simply because they can’t find anything else. Therefore, you need to order this series and book talk it up big to your chaps, both boys and girls.

Joseph St George raised in Germany by English spy parents is the perfect candidate for MI5 to infiltrate Hitler Youth and carry out top secret missions. The first two have been fraught, dangerous, and exhausting and Joe has little stomach for a third, but his parents, especially his mother, are in danger so his protests are quickly shut down.

Falkner really has a gift for building superb tension in his plot and his skill with ‘show don’t tell’ is now on my agenda to share with Year 9 English students, many of whom are struggling with this aspect in their current short story writing.

Joe is detailed to replace and impersonate a boy selected as one of the candidates for an elite competition, conceived by the Nazi elite. As you can well imagine, the prize offered for the successful entrant is dazzling, however the cost of failure is torture – even death. The other contestants are, by turns, likeable and loathsome and, overall, my reaction was the realisation of just how successfully Hitler manipulated the youngsters of German to become, essentially, a living arsenal. The virtual tour, as it were, of such infamous settings as the Eagle’s Nest provides a chilling backdrop to the non-stop action.  A really clever device Brian employs, are the extracts from (adult) Joe’s memoirs scattered throughout, which allow the reader insight into the character’s thoughts and emotions.

“I have been accused of whitewashing the Nazi leadership in my memoirs. Some people say I make them seem human. But therein lies the problem. I saw these men up close. They were human. If we think of them only as monsters and demons we may lose sight of the fact that they were very much like you and I. They had the same number of eyes, ears and limbs. If we forget what humans are capable of, we risk it happening all over again.”

There is not one of us that could deny this, in my opinion, particularly given the terrible events happening across the world right now.

Every bit as thrilling, and yes – often implausible – as Anthony Horowitz’ Alex Rider stories, this will capture the imagination of even the most jaded teen.  Set squarely amidst real historical events, with chilling insights into key figures and attitudes of the Nazi regime, this exciting tale of heroism, intense action, a little romance and devastating tragedy will have your older readers wanting more.   Needless to say, Brian is already on my list of intended authors to visit, hopefully, this year.

I strongly suggest you order this series immediately, just as I will be doing for my new library [which is in dire need of zhushing} and recommending it your older readers. Naturally with the wealth of historical fact woven throughout, it also makes an excellent choice for ‘read around your topic’ for those students of modern conflicts.  Learn more about this via Brian’s Knowledgebase.

You will also find teaching notes on the Scholastic site here.