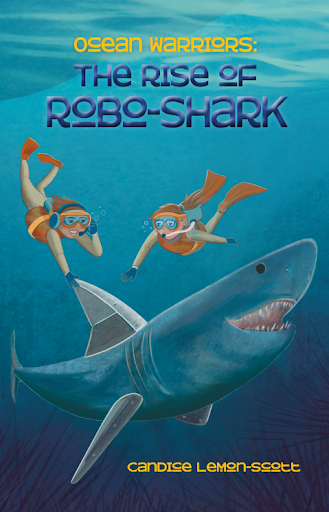 It’s fair to say that for me, on a scale of 1 – 10, sharks normally rate -5. Thankfully, this rocking new fiction by environ-guru extraordinaire, Candice Lemon-Scott, is about to turn all that on its head.
The first of what could be an exciting new series by an exciting new publishing house, Ocean Warriors: The Rise of Robo-Shark is a slippery-paced futuristic tale with a commanding conservational twist.

Kai and Emily are two highly-rated science youths seconded to a deep sea sub under the watchful eye of Wendy, head of Extinct Species Restoration.

Emily is thrilled by the summer holiday challenge to work with other scientists while Kai would rather be creating virtual games.

Their world is just a few short years from our own time but is vastly different. The effects of climate change, planet mismanagement and global greed have depleted populations of life-giving organisms both on land and in the oceans. Virtually all of the planet’s marine life is extinct leaving our seas as lifeless as an unused swimming pool.

Supposedly extinct, the cyborg great white shark is as confused by his existence as the sub-dwellers but after some initial reservations, Kai and Emily manage to communicate with the robo-shark whom eventually names himself, Melvin. Melvin is rapturous. Prior to meeting these humans he was the loneliest shark in all the seven seas; read: the only shark in all the seven seas. The three form an unlikely yet tight allegiance working together to save him and his species. Not all humans want to see Melvin and his offspring prosper and the fate of this apex predator is again in the hands of the most deadly species on earth – human beings.

Friendships, trust and the ocean’s survival are all put to the test in a tale that combines bum-breathing turtles and irksome sea cucumbers in one marvellous wave. Lemon-Scott’s penchant for infusing action-thrills-and-spills-adventure with serious ecological concerns and dressing them all with humour, quirky characters and moments of sabotage and betrayal makes Rise of Robo-Shark compelling reading for middle primary schoolers. Snappy chapter titles and rapid scene changes ensure non-stop page turning. The delicious paradox of falling in love with a great white shark is not lost on this afore mentioned shark-fearing individual. I am sure youngsters will find Melvin alluring in every possible way too, which is handy, for he becomes the incongruous hero and champion of marine conservation.

Ocean Warriors is a cautionary peek into the not too distant future that reminds us that it is ultimately easier to preserve rather than restore and is equally as thought-provoking as it is entertaining. Read more about Candice and her Eco Rangers series in this exclusive KBR Q & A Guest Post.