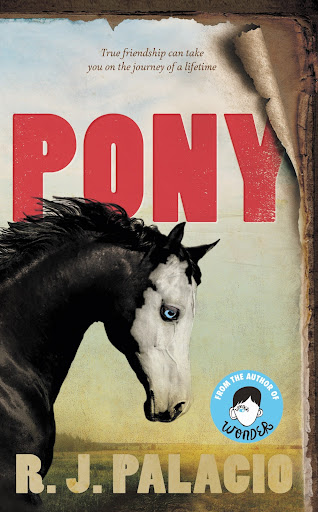 This is so completely and utterly different to anything in the Wonder suite but it is every bit as engaging, gripping and heart-warming.
With an historical setting that references the customs, time and place of late 19th century America, Pony is the story of Silas Bird, his unique gift and a friend named Mittenwool.

Silas has been raised by his father single-handedly, his mother having died in childbirth. Pa is a bootmaker but has a passion for ‘photography’ – that is  the daguerreotype process which he has improved upon to such an extent that his skilful work in creating portraits has almost eclipsed his cobbling trade.

For as long as he can remember Silas has had the company of Mittenwool. He realises at a very early age that it is only he who can see, hear and even touch Mittenwool and as he grows older he realises that his best friend is, in fact, a ghost – and not the only one that Silas can see.

When three rough horsemen come in the middle of the night and take Pa away by force, Silas is left alone with his fear but luckily with Mittenwool for some small comfort. A strangely marked pony which had been with the kidnappers returns the following morning, as if as a sign to Silas, who takes control of his fear, and despite Mittenwool’s stern warnings, the boy follows the trail of his captive father.

The wild and often frightening adventure that ensues, crosses wilderness unknown to Silas and the dubious help of a grizzled old US Marshall, who claims to be hunting the same gang, is little help to the boy who battles his constant struggle to keep his emotions in check. Along the way, Silas’ wonderings about his father’s true history, and thereby his own, becomes overwhelming and he also realises that whatever the outcome, his journey of discovery is only just beginning.

Silas’ quest for the truth about his father, his mother and Mittenwool lead him far away from his childhood home and the narrow confines of his life with his pa. The revelation of the terrible wrongs against the First Nations people, the sad history of the soldiers involved in the Mexican Wars and the impending grief of the Civil War all become part of the fabric of Silas’ journey and shape the rest of his life.

An adventure, a tale of love, courage and resilience with some history thrown in filled with memorable characters and dramatic incidents, this will become a firm favourite with many readers. Those who have quickly become fans of Oddity (Eli Brown) will certainly be keen as this echoes that same sort of setting. Although the publisher (and others) suggest ten years upwards, I am suggesting this for readers a little older as there is no doubt that some of Silas’ ‘ghostly’ encounters could be quite confronting for some readers.