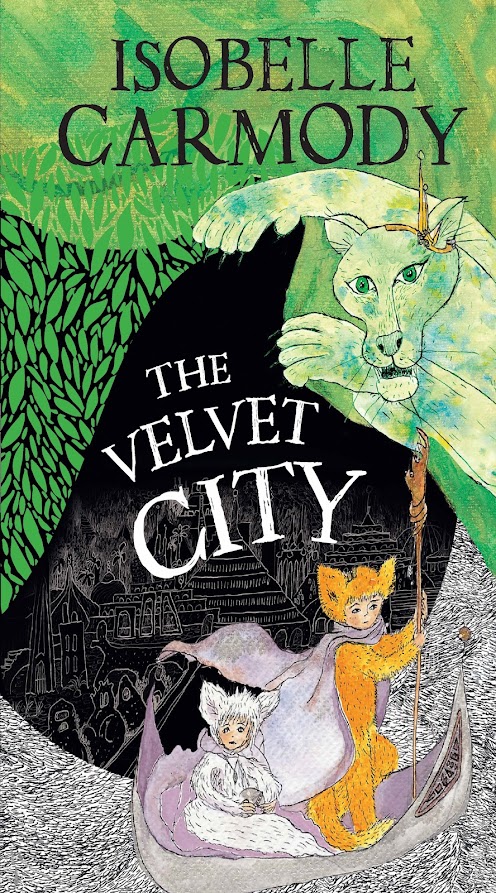 The long-awaited conclusion to The Kingdom of the Lost series is here.

The Velvet City brings Zluty and Bily’s journey to an end, but it’s not without challenge, adventure and the unwrapping of so many secrets that have weaved throughout the four-book series.

In the Velvet City, Zluty and Bily must leave the Monks, and the special home they’ve made with them over the long winter, and travel to the Velvet City with the Monster.

But things don’t exactly go to plan and the way they both make it to the city is not what either of them expected. Much like their travels since leaving their home, however, destiny seems to have found them and they end up exactly where they need to be.
Sometimes a slower pace, but never boring, the story has an addictiveness that is hard to describe. It’s the characters, I think. Rich and deep and fulsome. They are so ‘whole’, they are real, and their different views and  perspectives on their complicated world make for some intense and interesting reading. I just adore them.
I also adore the flexibility of this story. Read it as a fantasy tale of two brothers conquering evil in a strange and fantastical world, or dig deeper. Ask hard questions about the characters’ motives, and become obsessed (like me) with the mysterious makers — who they are and why the want to come through the sky.
The issues and themes the book raises are so deliciously varied: the environment, humanity, right and wrong, stereotyping and fear. But in a way that is just so ‘Isobelle Carmody’, none of the themes are obvious or hit you over the head with messages. You get to pull out the tendrils you’re drawn to, think what you want to think, and ask the questions you want to ask. There’s so much hidden within the story, this is one of those series worthy of a second read through just to pick up on secrets you may have missed.
If you’re a fan of Carmody’s work, you will adore this series. And if this is your first Carmody tale, it’s a very special one to start with. It’s junior fiction/middle grade depending on the reading style of the audience, but it’s also a book for teens and adults alike. It’s just good storytelling.

One of Carmody’s special gifts is the ability to implant impressions and feelings in readers long after they close the book. This novel is no exception. While my adventures with Zluty and Bily are now over, I have a sneaking suspicion they won’t disappear from my mind any time soon.

And I love that.

Note: this is a series best started from the beginning and read in order. To find out about the other books in the series, check out The Red Wind (book 1), The Cloud Road (book 2) and The Ice Maze (book 3).