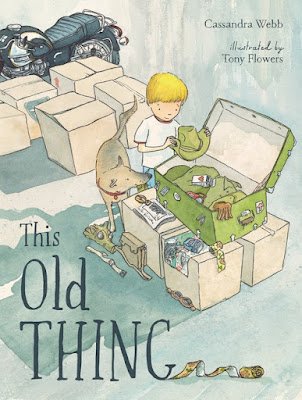 This Old Thing is about memories and remembrance, and about war and the different perspectives we have of things.

A young boy has been asked to bring something to school for an ANZAC remembrance project and goes hunting through boxes at home.

He finds old newspapers and objects, things from long ago. They belonged to someone who went to war.

The story, written by Cassandra Webb, uses sparse and repetitive text, with two related plot lines unfolding together as you read. The illustrations by Tony Flowers reflect this in a clever way.

One image on each double-page spread features the young boy with an object he’s found. The other image on the page shows the object in use by the soldier during the war. There’s an army slouch hat. Sturdy boots that marched long distances. And an old metal cup once used to drink something warm.

The boy playing around with now disused items like an old gas mask, is juxtaposed with the same items being used for serious and important protection in times of war. It presents them in a way that is not too confronting, but still clear about the reality of war.

All these old things from long ago seem unusual to the young boy, until he finds a photograph of his great-great-grandfather dressed in the hat and boots and makes a personal connection with them all. It’s that photo that helps him understand, and he decides he wants to contribute the photo for the project.

These Old Things is a special and poignant story that connects historical events to people. It’s an excellent book to use with young children, and will help explain the events which led to ANZAC Day.