Tiger, Tiger, Burning Bright!: An Animal Poem for Each Day of the Year by Fiona Waters and Britta Teckentrup is a beautifully illustrated compendium of poems from all over the world about animals. 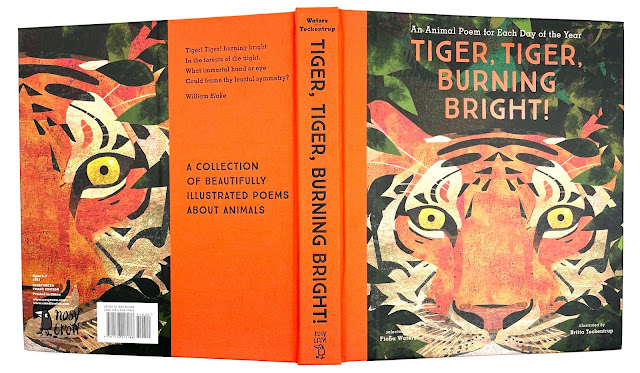 Broken down into the days of the year, every spread features anywhere between one and four poems centered around a specific animal, with each poem corresponding to a day of the year. In January we read thirty-one poems about thirteen different animals, in February we read twenty-nine poems about eleven different animals, and so on. Each month is preceded by a table of contents listing each day’s poem for the month, and the backmatter features an index of poets, an index of poems, and an index of first lines (so clever!). The book itself is also pretty hefty at 324 pages, which makes sense for a book that covers every day of the year!

The digital illustrations are incredibly colorful and resonant. As previously mentioned, each spread features a different animal, so Teckentrup truly has a chance to play with every color in her illustrations, explore every combination of layout for her images and the poetry, and research (just about) every animal since there are dozens upon dozens referenced in the poetry Waters chooses to include. Oftentimes Waters includes concrete poetry (or visual poetry), and Teckentrup is always careful to design her illustrations around the words themselves in those cases, which is a nice touch.

Tiger, Tiger, Burning Bright!: An Animal Poem for Each Day of the Year published from Nosy Crow earlier this season.