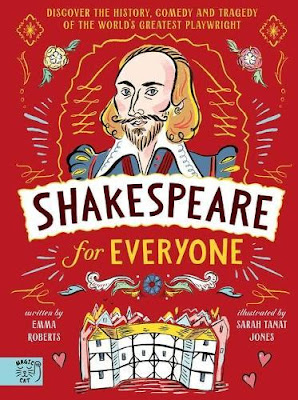 Who was William Shakespeare and why is he famous? Shakespeare for Everyone takes us on a journey through history, to learn about the man considered the world’s greatest and most influential playwright.

Beginning with an introduction to Shakespeare and his life and times, it goes on to introduce theatre in the late 1500s and early 1600s, including physical and historical information about The Globe and Burbage’s Theatre which were popular at that time.

Readers will learn about Shakespeare the actor, because it is believed that he may have performed as well as written plays. The book explains how actors lived and worked, that they were known as ‘players’ and had to work hard to memorise their lines in a short amount of time as well as to sing and dance.

Shakespeare for Everyone summarises Shakespeare’s achievements. He wrote both plays (at least 38) and poems (almost 160), and they cover multiple genres, including histories, comedies, tragedies, and romances. But just what places each of these plays in those genres? What are the common features of such plays?

You’ll learn about recurring character types and other aspects of Shakespeare’s plays. For example almost two-thirds of his plays feature a character designated as a ‘fool’, the kind who seems to get away with just about anything.

You’ll also learn about popular creative devices such as the tragic hero having a flaw that plays an part in driving the plot, shortening the time frame for events, or moving back and forth between different groups of characters to connect sub plots.

Examples from Shakespeare’s plays are used to explain all of these strategies and other aspects of his writing. In exploring his sonnets, it also explains what one is, and how they appear in some of his plays.

Shakespeare for Everyone also raises the controversial question of whether or not William Shakespeare was real. Three historical figures have been named as possibly being behind the work of William Shakespeare. Although nothing has ever been proven, it’s a theory worth mentioning if we are to have a more rounded understanding of the man and his life and place in history.

At the conclusion of the book the legacy of William Shakespeare is discussed. He has had a significant impact on history and modern times. From countless movies and theatre productions, to words and phrases that he created becoming part of everyday English language.

Informative, accessible and entertaining, Shakespeare for Everyone is highly recommended.